Once the Detox is complete, Naltrexone is given to the patient under medical Supervision to prevent relapse to Opiates and alcohol.
Cocaine and ice/amphetamine (under trial). Naltrexone can be given in 3 forms :

What is Naltrexone and how does it work ?

Naltrexone is an opioid receptor antagonist used primarily in the management of opioid dependence. Naltrexone works by blocking the opioid receptors in the brain and therefore, eliminating the effects of heroin, methadone, morphine and other opiates. The effect of Naltrexone is to block the part of your brain that feels pleasure when you use narcotics. Naltrexone does not make you feel sick if take drugs while taking it, but makes it impossible to get high. 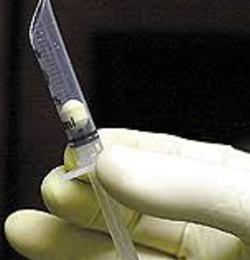 Naltrexone implant is inserted under the skin or muscle. Naltrexone implant blocks the effects of heroin, methadone, morphine and other opiates. They gradually release their medication into the blood stream just as if the patient was taking their Naltrexone tablets every day for weeks even months. The opioid receptors are blocked making effect of heroin or other opiates impossible.

Naltrexone depot looks like white or light grey cylinders, balls or tablets in a sterile pre-loaded syringe. Different types of Neltrexone implants (Naltrexone pellets) contain from 500mg of Naltrexone and more. It actively provides relapse protection from 2 up to 12 months.

Small surgical intervention is performed with local anesthesia. It is inserted through a 2-3cm incision in the lower abdomen or at the back of the upper arm. The Naltrexone depot is inserted under the skin or muscle.

Naltrexone is also available in injection form. It is given once in a month for 3-6 months.

Naltrexone is also available in the tablet form which is given everyday for 3-6 months.

Naltrexone is effective in more than 90 percent of the patients. In less than 10 percent patients due to its rapid metabolism or due to unknown causes it fails to block the effect of drugs/opiates.